Extrasolar planets are systems, which don't belong to the Solar system. There have been total of 765 planets that were detected using different methods (Schneider, J. 2011). Methods used for detections so far are; 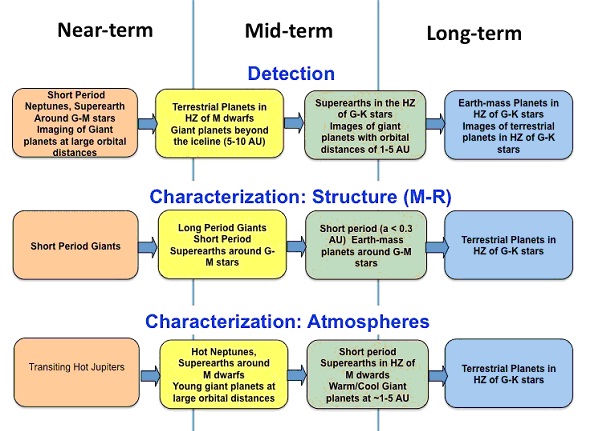 Fig-1.2-1. Schematic showing the rough timeline for milestones for our â3-lanesâ of detection, characterization of internal structure (mass, radius, mean density) and the characterization of spectral atmospheres. Near term is approximately 2011-2017, Mid-term 2015-2022, and Long-term beyond 2010. Technological difficulty and time proceeds left to right, and top to bottom (Hatzes, A. P. 2011).

1) Radial Velocity (RV) Method This method is the most common method in finding exoplanets. RV technique provides the mass information of the system and it is also used to check the planet candidates found with transit method. This method will continue to play an important role in exoplanet studies.

Future: Improved wavelength calibration that is needed to achieve an RV error of better than 10 cm sâ1, improved instrument stability, and overcoming the intrinsic variability of the star (stellar activity noise).

2) Transit Detection The photometric transit method detects planets by the dimming of stellar light during transit of an orbiting planet through the line-of-sight.

Future:Follow-up observations using high-resolution imaging and photometric observations are needed to confirm the signal on the target star. Medium to large telescopes are finally required to derive the planet mass as well as important fundamental parameters of the host stars.

3) Astrometric Detections In finding extrasolar planets, astrometric detection method is attached with radial-velocity method. By detecting radial component of the radial motion (RV technique) and using astrometry measures mass of the planet can be found without relying on the sin i parameter.

Future: The astrometric detection of Earth analogs requires a precision of better than 1Î¼as, which can be achieved with a space-based interferometer.

4) Imaging Detections Directly detecting such dim objects is one of the hardest things to accomplish. The first successful direct images of extrasolar planets were obtained in 2005 at VLT for GQ Lupi (NeuhÃ¤user et al. 2005) and 2M1207 (Chauvin et al. 2005). Until 2010 it was not possible to detect exoplanets with direct imaging but only under exceptional circumstances. With use of an upgraded system on 1.5-meter portion of the Palomar Observatory's Hale Telescope, 3 known exoplanets orbiting the star HR 8799 was detected (Serabyn et al. 2010).

**Future: Direct imaging campaigns (SPHERE/VLT,EPICS/E-ELT) will complementary astrometric detections. Ground-based direct imaging techniques may have a long enough time base to detect orbital motion of a long-period giant planet and thus to measure its mass. This work can begin with the âPlanet Findersâ on the 8-m class telescopes and continue with the extremely large telescopes (TMT, E-ELT, GMT).

5) Microlensing "If a foreground object (star, free floating planet, black hole) passes very close to the line of sight to a background star, the 'source', then the gravity of the foreground object acts as a lens. The result, as the projected separation on the sky between source and lens changes, is a characteristically shaped brightening and fading of the source star on a time-scale of a month. If a planet orbits the (not necessarily seen) foreground 'lens' object, its gravity can affect the light rays as well, causing a short deviation from the otherwise symmetric light curve. The duration of these deviations depends upon the mass of the planet - days for a Jupiter mass and hours for an Earth mass" (Hatzes, A. P. 2011). Drawback of this method is that it is hard repeat the observation since alignment needed might never occur again.

Future: Wide-field survey telescopes can be used to provide the high cadence observations needed to detect and follow anomalies. The sensitivity of groundbased microlensing campaigns is governed by angular resolution.

6) Timing Detections It is also possible to detect planetary companions to stars by searching for timing variations. One of the most sensitive techniques in finding planets is the pulsar timing method. By this technique it is possible to detect exoplanets less than a tenth the mass of Earth. Disadvantage of this method is that pulsars are relatively rare. Timing variations of stellar oscillations and also eclipsing binary stars can also be used to search for timing variations in the eclipses caused by planets either around on companion, or circumbinary planets. 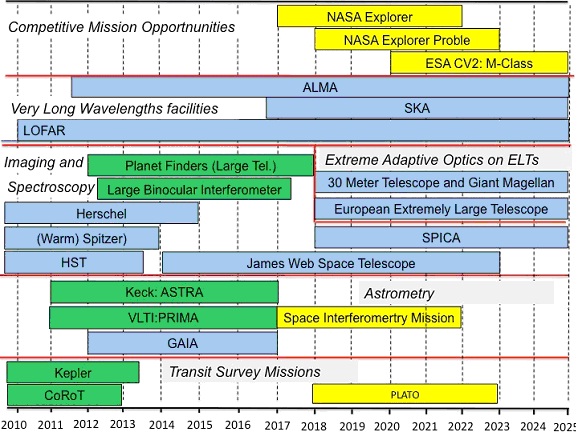 In the study done by Hatzes, A. P. (2011) exoplanet studies were carefully analysed and the road map was proposed. Given in this study the key questions to be answered by this roadmap (in order of difficulty) are;

What can be done with DAG